At first the coat of arms was a practical matter which served a function on the battlefield and in tournaments. With his helmet covering his face, and armour encasing the knight from head to foot, the only means of identification for his followers was the insignia painted on his shield and embroidered on his surcoat, the flowing and draped garment worn over the armour. 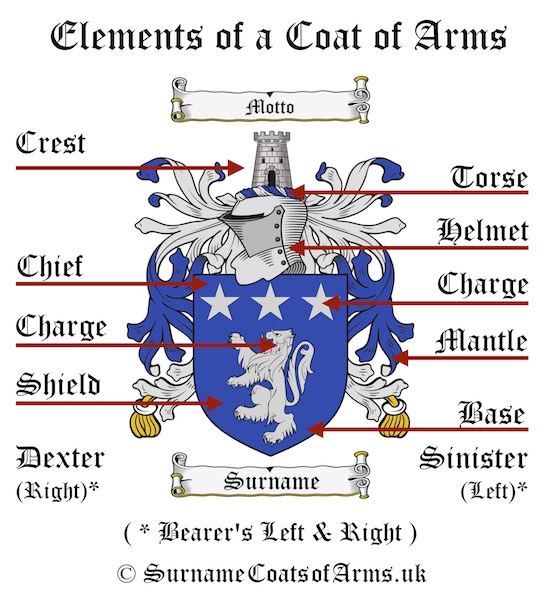 A coat of arms or ‘coat-armour‘ (sometimes ‘incorrectly‘ called a ‘family crest‘) is made up of the following elements as shown in the image above:

Crest: This is the smaller image that sits on the ‘torse‘ above the ‘helmet‘ (or ‘helm‘).

Shield: This is the main part of the coat of arms containing the charges (images), layout and colours. The shield is also called an ‘escutcheon‘ and ‘arms‘.

Motto: A motto (if recorded) will normally appear on the banner above the crest and is usually recorded in Latin, French, Welsh, Gaelic or English.

Charge or Charges: These are the images appearing on the shield. A smaller image placed on another image will use the word ‘charged‘, for example, “an eagle displayed proper ‘charged’ with a gold crescent on the chest“.

Chief: This is used to describe the upper area of the shield.

Base: The base is the lower area of the shield.

Torse: The ‘torse‘ or ‘wreath‘ is a twisted roll of fabric comprising of six parts with alternating colours to match the mantle (i.e. silver and blue). The torse sits directly on the helmet below the crest.

Helmet: This is a knight’s helmet (also called a ‘helm‘ or ‘peer’s helm‘) and is placed above the shield bearing the torse and crest.

Mantle: The mantle (or ‘mantling‘) is an ornamental drapery used to display the shield and helmet which makes up the coat of arms image. The mantle colours should be one of the main colours (tinctures – see below) with one metallic colour (silver or gold) – not two metallic colours together or two main colours together – and will match the alternating colours used on the torse.

Dexter: This is the right side of the coat of arms from the bearer’s point of view.

Sinister: This is the left side of the coat of arms from the bearer’s point of view.

The colours used in heraldry for the main colours on the shield, torse, and mantle are made up of five colours (tinctures) and two metallic colours. These are:

Argent (Silver): This is silver or silvery white and is one of the two metal tinctures. “Ar.” is the abridged version of Argent. The precious stone associated with Argent is Pearl and the planet Luna.

Or (Gold): This is the gold tincture and the other metallic colour used. “Or” is how this appears in heraldic blazons. The precious stone associated with Or is Topaz and the planet Sol.

Sable (Black): “Sa.” is the abridged version of Sable. This tincture is associated with the precious stone Diamond and the planet Saturn.

Gules (Red): “Gu.” is the abridged version of Gules. This tincture is associated with the precious stone Ruby and the planet Mars.

Azure (Blue): “Az.” is the abridged version of Azure. This tincture is associated with the precious stone Sapphire and the planet Jupiter.

Vert (Green): “Vert” is how this appears in heraldic blazons. This tincture is associated with the precious stone Emerald and the planet Venus.

Purpure (Purple): “Purp.” is the abridged version of Purple. This tincture is associated with the precious stone Amethyst and the planet Mercury. Purple is rarely used in heraldry.

The word ‘proper‘ is used in heraldry to mean the natural colour of something. For example, ‘a salmon proper‘ would be the natural salmon colours of silver and pink, or ‘a bear proper‘ would typically be shown as brown or black.

This website uses cookies to improve your experience while you navigate through the website. Out of these, the cookies that are categorized as necessary are stored on your browser as they are essential for the working of basic functionalities of the website. We also use third-party cookies that help us analyze and understand how you use this website. These cookies will be stored in your browser only with your consent. You also have the option to opt-out of these cookies. But opting out of some of these cookies may affect your browsing experience.
Necessary Always Enabled
Necessary cookies are absolutely essential for the website to function properly. This category only includes cookies that ensures basic functionalities and security features of the website. These cookies do not store any personal information.
Non-necessary
Any cookies that may not be particularly necessary for the website to function and is used specifically to collect user personal data via analytics, ads, other embedded contents are termed as non-necessary cookies. It is mandatory to procure user consent prior to running these cookies on your website.
SAVE & ACCEPT